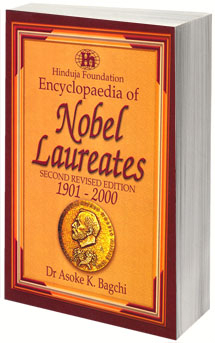 An encyclopaedia of Nobel Laureates going back to 1901. It also serves as reference book, as the entries include a brief biographical sketch along with their contributions. The book contains the photographs of all the Nobel Laureates since its inception in 1901.

Dr. Asoke K. Bagchi is a reputed neurosurgeon. Researching the Nobel Laureates has been a hobby for him for the last 30 years. Besides being a neurosurgeon, he is a Ph.D. in Sanskrit Literature and a prolific writer. He was also awarded a honorary doctorate by the World University of Tucson, Arizona.

Konark made waves with one of its first books: Hinduja Foundation Encyclopaedia of Nobel Laureates by Dr. Asoke K. Bagchi. The Nobel Foundation in Stockholm was impressed by this volume and wrote, “It is of great value to have a comprehensive collection of the presentation of the Nobel Laureates. There are already a number of such works from different points of view and of different standards. Your encyclopaedia is one of the best.”