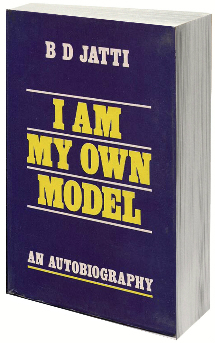 I Am My Own Model: An Autobiography (Hardcover)

By B D Jatti

B.D. Jatti has been writing things worth reading, and he has also been doing things worth writing, and his present autobiography, I Am My Own Model is a candid unfolding of his life, starting from his childhood to the hard struggle for freedom, from his active participation as guide to the poor man to the handling of administration and above everything, as a true Gandhian in the service of the downtrodden. The road to success is not always rosy and Jatti describes the difficulties he had faced during his long span of political career which culminated in the various distinguished positions he had held. The book makes an interesting study of social and political scenario of this eventful period and of the different political personalities with whom he had to work.

Basappa Danappa Jatti was born on 10 September, 1912 in the state of Karnataka. He was educated at Rajaram College, Kolhapur and Sykes Law College. He started his practice in law in 1941 but soon came into contact with Mahatma Gandhi and took part in the freedom movement. He was the first leader who fought for the merger of Jamkhandi state.