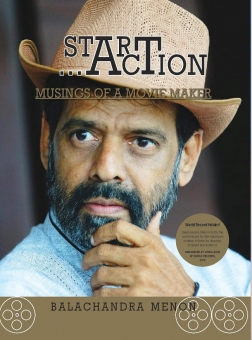 Start…Action: Musings of a Movie Maker

Balachandra Menon is a household name in Malayalam Cinema. As Writer, Director, Actor, Editor, Music Composer, Singer, Producer and Distributor, his contribution has been significant. He is perhaps the only filmmaker who has lasted for 40 years on his own resources without being carried away by trends and demands of stardom prevalent in commercial cinema.

This tell-all account was first published by him (through his production house, V&V) in Malayalam as Ithiri Neram Othiri Karyam which turned out to be a bestseller. Each chapter in this book carries a quote by a celebrity followed by a confession by the author where he narrates anecdotes about the challenges he faced and how they enriched him and helped him wade through his film journey. Menon jocularly says that a competent filmmaker should use one eye to look through the viewfinder of his camera and use his other to see what is happening around him in the unit. He has no qualms in admitting that his existence in cinema is founded on the goodwill of the masses and not based on paid write-ups in social media.

Funny, witty and enlightening, this book is a must-read for scholars of film studies, lovers of cinema, inspirational for film aspirants and interesting and nostalgic for a common reader staying anywhere in the world.

Balachandra Menon, in a career graph of 40 years in Malayalam Cinema enjoys the rare distinction of maximum number of hits. His memorable films include ‘Karyam Nissaram’, ‘April 18’, ‘Chiriyo Chiri’, ‘Oru Painkilikkatha’, ‘Ammayane Satyam’, ‘Njaan Samvidhaanam Cheyyum’ to name a few. He created a family audience of his own who enjoyed meaningful cinema which were value based and hence he is known as the favourite family maker of the masses.

Starting his career as a journalist, he went on to create the record of being Number 1 in the world, as declared by Limca Book of Records, by directing the maximum number of films based on his own script and acting in it. He has 29 such films. He received the National Award for the Best Actor of India in the year 1997 for his role as Ismail, a railway station master in his film Samaantharangal. This film in which he got involved in 10 departments also fetched him the National Award for the Best Feature Film on Family Welfare both as Producer and Director. He also enjoys the rare distinction of introducing maximum number of new talent to the industry, especially heroines who later became the reigning stars in South Indian Cinema. The Nation honoured him with the Padmashree in 2007.