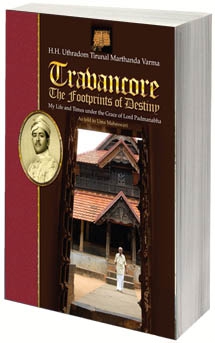 Travancore: The Footprints of Destiny (Hardcover)

Travancore: The Footprints of Destiny is an unusual work among the chronicles of the amazing history of Travanore. The author, the present Maharaja of Travancore, renders his life story from the larger perspective of the historical forces that have shaped the life and times of Travancore during the past millennia. The grand sweep of history reaches its spectacular culmination, as it were, in the historic rites of passage—the accession of Travancore to the Indian Union after Independence. The Maharaja has had the rare privilege of witnessing history from close quarters, especially during the time his elder brother His Highness Sri Chithira Tirunal was the King of Travancore.

His Highness Uthradom Tirunal Marthanda Varma is the present Maharaja of Travancore. Widely travelled, His Highness leads a very active social life, often being invited to deliver lectures and preside over major events.