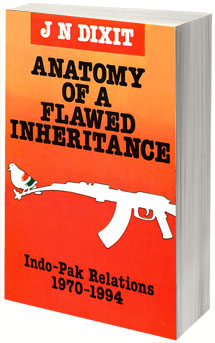 Contradictions in Indo-Pakistan relations, which have affected the lives of the people of the subcontinent for the last five decades go beyond the issues of politics and security on the questions of territorial integrity. The author has attempted to answer it in this book through a chronological analysis of trends and events during the period 1970-94. The book analyses the adversarial relationship between India and Pakistan beyond the known orthodoxies. The objective, according to the author, is to provoke introspection among the people of the subcontinent about the logic of the adversarial relationship bedevilling their collective well-being, which is their flawed inheritance.?

Jyotindra Nath (Mant) Dixit, former Foreign Secretary of India and Ambassador to Bangladesh, Afghanistan, Pakistan and Sri Lanka, dealt directly with Pakistan four times. He was Under-Secretary at the Pakistan desk briefly in 1964 and was the Director of the Special Task Force dealing with the East Pakistan crisis between November 1970 and January 1972. Dixit was the Head of India’s Mission in Pakistan from the beginning of 1989 to the end of 1991. And Pakistan remained an important part of his charge as Foreign Secretary, from 1991 to 1994. During his 36-year-long diplomatic career, Dixit served in various capacities in South America, Japan, Europe, the United States and South Asia. He has been on Indian delegations to the United Nations Security Council and has participated in a large number of multilateral conferences both the political and technical, including summits of the Non-aligned Movement, Commonwealth and the SAARC. Dixit published an anthology of his poems in English, entitled Self in Autumn, nearly a decade ago.