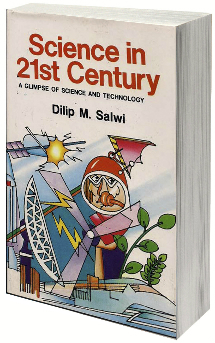 Science in 21st Century: A Glimpse of Science and Technology (Paperback)

The book discusses some futuristic possibilities in the field of science and technology which the 21st century may hold in store. It surveys the scientific and technological advances made in diverse areas to give the common man an idea of what to expect. The unfolding scenario is replete with space planes, robots, airships, windmills, solar bicycles, irradiated foods, recycled waste, etc. The book is essential for anyone who wants to prepare himself to face the challenges and to make the most of the opportunities that the 21st century would offer. Although aimed at the common man, it would be of interest to sociologists, economists, scientists, technologists, engineers, policy-makers and planners, and not the least, politicians.

Dilip M. Salwi is a New Delhi-based science writer. He has authored more than 20 popular science books, including science fiction and anthologies. Some of his bestselling books are: Our Scientists, Story of Zero, Robots are Coming, 1000 Science Quiz and 1000 Maths Quiz. His books have won the Children's Book Trust Prizes and his journalistic writings have fetched him the Sanskriti Award. Salwi is also the Science Consultant to the Limca Book of Records. He has been honoured with Dr. B.C. Deb Memorial Award for popularisation of science for the year 1995-96 at the Indian Science Congress.