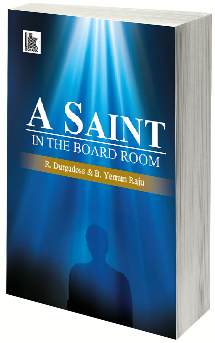 A Saint In The Board Room (Paperback)

A Saint In The Boardroom follows the protagonist, Arjun, who is a successful banker educated in Harvard University. His success is easily measured by the title he holds in being lauded as the ‘best CEO of all banks’. His happiness is abruptly ended with the financial crisis that sucks into its vortex the world of banking that Arjun is intimately associated with. This reality’s blow is compounded with Arjun learning of his father’s death. A well loved teacher, his values are lost on his son, Arjun. The failed banker had become a major link to the world of finance that is bereft of the morality or ethics that his father so keenly pursued through his life.

Arjun makes the journey to his hometown Lalgudi, a small town in Southern India from London to attend the final rites of passage following his father’s death. The ten day long rituals become more than just a religious rite of passage and Arjun finds himself answering his dearly departed father’s questions. This becomes closer to a quest for enlightenment. What is the real secret or what are the real secrets to winning. His father answers this pertinent question through a parallel argument that outlines the importance of winning without sinning.

Is there salvation for Arjun, not just spiritually but to find a foothold again in his desired profession. A Saint In the Boardroom answers these questions through the narrative structure of conversations between a father’s soul and his son. The book is aimed at finding the right strategies to emerge victorious from a battle.

R. Durgadoss is a management consultant and A Saint In the Boardroom is his debut in the literary landscape. He has a Ph.D in corporate governance and has been associated with consultancy for over thirty years. He is currently Group Director for Finance and Strategy in the House of S.T. Bhatia, UAE.

Yerram Raju Behara is a well known economist, banker and management consultant. He has also worked as an educator in the Administrative Staff College of India. He has been honoured as a recipient of the International Man Of The Year(1991-92) award among other accolades bestowed through his prolific career. He is presently a member in the Expert Committee on Cooperative Banking in Andhra Pradesh.