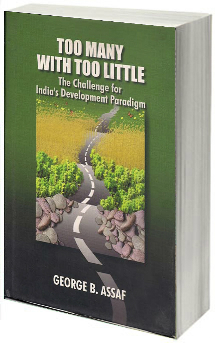 Too Many With Too Little: The Challenge for India Development Paradigm (Hardcover)

The Indian economy has progressed steadily since independence, and especially since economic liberalisation began in 1991. The economy has proven its resilience to shocks—both internal and external. There are major strengths but significant roadblocks still persist. The road ahead is difficult and the speed of change envisaged fast. Can India realise its potential? The book discusses this prospect in terms of economic, particularly industrial, development. It presents the thoughts — in the form of a collection of essays—of an applied development practitioner, trained as an economist who has been deeply involved in this process right from the formulation, financing, start-up, implementation, monitoring and evaluation of various industrial development projects.

Dr. George Assaf is a senior officer in the United Nations Industrial Development Organisation (UNIDO) and this book is the result of his tenure and extensive travel as the UNIDO Representative and Regional Director for South Asia (India, Nepal, Bhutan, Bangladesh, Sri Lanka, Maldives and Afghanistan). He received his Ph.D. from Oxford University, has taught at the London School of Economics and has published widely in industrial and development economics.