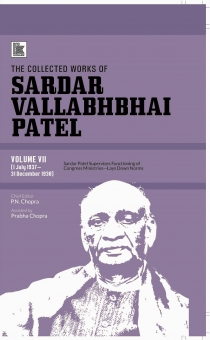 Volume VII (July 1937-December 1938) covers the period after the Congress had come to power in seven provinces. Sardar Patel was the Chairman of the Parliamentary Board and looked after the functioning of the Congress ministries. He pushed for the criterion for the selection of a minister should be based on his capability and not on him being a leader of a particular group. He was also very strongly opposed to the influencing of the bureaucracy by the elected representatives.