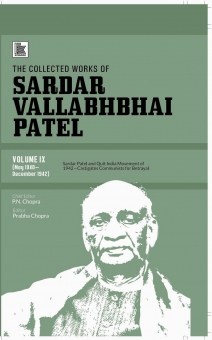 Volume IX (May 1940-December 1942) described Sardar Patel touring the country and encouraged people to drive out the British reign. He called upon the British Government to form a National Government that represented all political par­ties. Simultaneously, he made it clear that India would not allow the Japanese or Ger­mans to rule over us even if they were successful in the war.