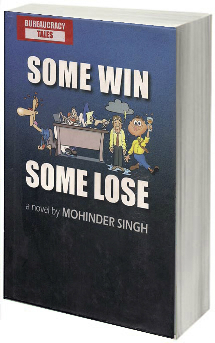 Some Win Some Lose (Hardcover)

The story revolves round four members of the IAS who joined service at the same time and happened to become friends. The tale takes them from their initial training days in the early fifties to the close of their career by the late eighties. The four, the chosen people, a part of the country's premier service begin their career brimming with energy, high hopes, and a measure of idealism. What would make for their success or failure? Is it all hard work? Is it is a question of intellect? How much does integrity come into play? Is it clever man-management? Or is it sheer luck? Is character destiny? Character in the broadest sense is that indescribable mix that an individual is of thoughts, words, feelings, values, and above all action. And it may not be one decision that makes or unmakes a man, but the consistent concatenation of all his decisions over a lifetime of action and reflection.

Mohinder Singh has recently published a novel, A Sikh Boy (HarperCollins, India) related to the partition of the country. He has also authored three books—Road Transport (Konark), Health & Food, and Woman & Child (Gyan Books). He has also contributed over a thousand articles in newspapers and magazines. Mohinder Singh retired from the IAS as Secretary to the Government of India. He lives in Delhi