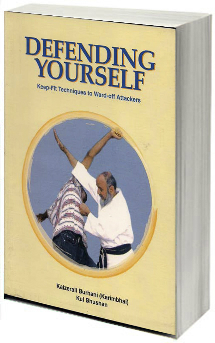 Defending Yourself: Keep-Fit Techniques to Ward off Attackers (Paperback)

There is so much violence in the world today, bag-snatchers are lurking in almost every street corner, ordinary muggers and other bad elements are always looking for their prey.So everybody thinks about safety and security. There are several ways to defend oneself but the best is unarmed self-defence. The book contains easy-to-follow instructions to face any physical assault. It is meant for the people who are keen to attain self-defence proficiency. Defending Yourself is a simple guide to everybody to develop the ability to foil any physical attack.

Kaizerali Burhani (Karimbhai)—a Black Belt expert in Martial Arts and honoured with a gold medal by Japan government—has drawn on his four decades’ experience to compile this book.

Kul Bhushan, a newspaper editor and publisher, distinguished himself in his profession during his 30-year career in Kenya. He was honoured with the ‘Journalist of the Year’ award while working as Business Editor of The Nation, the largest newspaper group in East Africa. He also represented the International Press Institute, the global body of editors and publishers, in Africa.