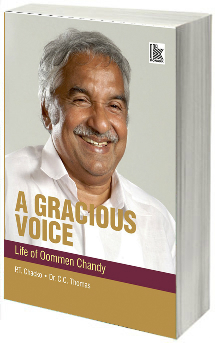 Oommen Chandy's life happily combines the political with the personal. In fact, the two are inseparably intertwined. The design and execution of the biography is to bear out this unique fusion in OC's life. Of its 150-odd pages, hardly ten are devoted to matters exclusively personal and private. The rest is all political and public. A man of the people is obviously destined to live for the people, and be led by the people. OCs life runs such a course. The three part division of the book follows a distinct order. The first part is laid out in two chapters; the second is in three chapters. And the third brings up the rear in two short ones. The titles of the chapters serve as signposts to show the reader the directions of the narrative. In Part One, the first chapter deals with the part OC plays in the public affairs of Kerala today, both as Leader of the Opposition. The second chapter gives a detailed overview of OC's short but eventful tenure as Chief Minister of the State. It is a flashback into the immediate past. The three chapters of Part Two do some stocktaking, and give us a glimpse into what went into the making of the committed politician of today. It traces the various milestones in his long career as KSU activist, Youth Congressman, Trade Union Leader, MLA, Minister and UDF Convener prior to his roles as CM and Leader of the Opposition. Part Three focuses on OC's personal and public relations at Puthupally, his hometown and constituency. The limelight then falls briefly on his family and home affairs. A chronology has been appended. That sums up A Gracious Voice.

The Press Secretary to Opposition Leader, P. T. Chacko has also worked as a journalist with the Malayalam daily, Deepika, for over fifteen years. He has won numerous prestigious awards at the state, national and international levels for his investigative and general reporting like the K. K. Birla Foundation National Fellowship For Journalists for the research project 'Globalization and its Impact on Kerala Agriculture' in 2002, the UCIP (International Catholic Union of the Press) International Award for Excellence in Journalism in 2004 and the M. Sivaram Award of Trivandrum Press Club for Best General Reporting in 2003 and 2004 He has also authored several books like Thurannitta Vathil- Biography of Oommen Chandy and Janasabdathine Nalapathandu- The Edited Assembly Speeches of Oommen Chandy. He lives in Trivandrum with his family.