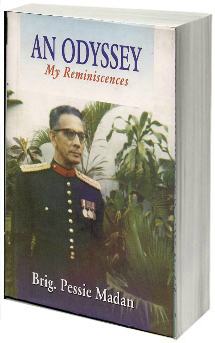 An Odyssey: My Reminiscences (Hard Cover)

An Odyssey by Brigadier Pessie Madan traces the life of one of India's early leaders in the high-technology industry, from his youth in Burma to his rise through the Indian military and later the private sector. The memoirs do not follow a strict chronological sequence. Like the view of a distant landscape, peak events merge seamlessly with the ridges of family life. The book portrays the transit of the 20th century to the 21st: a shift from the insular and Victorian culture of British colonial rule, accentuated by elaborate social codes and symbols, to the birth of a fledgling democracy driven by advances in engineering and technology. With a deft narrative style, the author first describes the turmoil, chaos, despair and destruction of Rangoon, where he was born and spent his youth. Caught in the fury of the Japanese onslaught after Pearl Harbour, in a city weakened by the ignominious retreat of the British forces, the author (then a twenty-five year old) follows in the wake of the retreating British army. Enduring considerable hardship and adventure as he escapes to India, Madan finally reaches his destination, and is commissioned by the British army, where he commands a field unit in the turbulent North-West Frontier Province.