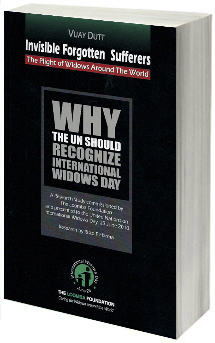 Invisible Forgotten Sufferers: The Plight of Widows Around The World (Hard Cover)

This book on the world's widows has primarily been written to convince the United Nations that the exploitation, torture and humiliation of widows the world over and the stress that their children are put to is a human rights issue. And, therefore, the UN must treat them as victims of human rights violations. The Loomba Foundation has been campaigning that June 23 be officially recognised by the UN as the International Widows Day so that on that day a certain awareness about the plight of widows is raised globally. The Foundation has also prepared comprehensive guidelines for the UN, governments and communities to help protect and nurture the world's widows and their children.

The book provides an in-depth analysis of the state of widows, the causes for their deprivation, and its effects on their dependents. It also shows how laws have failed and customs and old beliefs continue to torment widows, especially in the developing world. The book also seeks to make an appeal to the UN to set up an exclusive agency for widows to help them fight discrimination. It also presents various ways of empowering these hapless women so that they can get out of the clutches of their tormentors and be able to live independently and give their children a future on the planet.

A veteran journalist and a perceptive social and political commentator for over three decades, Vijay Dutt has had the unique opportunity of studying the polity and social ethos of both India and Winner of an award for independent writing and unbiased views, he was one of the few journalists to be selected as a member of the Indian delegation to the UN General Assembly in 1990. He was witness to the highest level of international diplomatic intrigues and manoeuvres. He also covered various international summits, including G8 and G20. Dutt is the author of Times By the Thames, a “kaleidoscope of impressions” about British politics, media, the Indian diaspora and much more. Dutt's interest in the state of widows and his interactions with leaders and activists of organisations dedicated to the uplift of widows in developing countries coupled with his knowledge about such hapless women in Europe as well, gives him an incisive understanding about the trials and tribulations the widows of the world face today. His indepth study of the state and issues of widows is reflected in the book. Dutt is also a Jawaharlal Nehru Fellow.