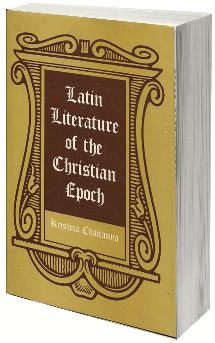 Belonging to Krishna Chaitanya’s series on the history of world literature, this book gives an account of the Latin literature of the Christian epoch. Initially the two culture mentalities of pagan Rome and Christian Rome, were sharply polarized, with the new faith rejecting everything connected with the old as contaminating. However, as centuries went by, a Christian humanism evolved which perceived and assimilated the many fine values which were there in pagan classicism.

Krishna Chaitanya, whom a national periodical has described as “one of the most original and stimulating minds writing in the subcontinent” has written about forty books. They include a ten-volume history of world literature; books on the arts including a four-volume history of Indian painting; a history of Sanskrit literature, the most comprehensive book so far on Indian poetic, a translation and commentary of the Gita, and a five-volume philosophy of freedom.