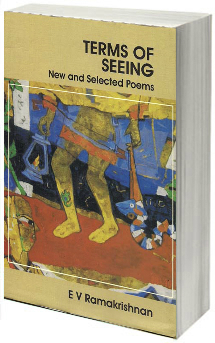 This is E.V. Ramakrishnan’s third volume of poems in English. His poems evidence a deep disquiet that is pointer to the times we live in. He captures the vulnerability of our socio-political frameworks in understatements, self-reflexive comments, casual observations and graphic images. He would rather allow the poem to speak than comment himself. Most of the poems in the volume move towards a moment of alert receptivity when words cease to be mere words, but open up to momentary perceptions of relationships between human being and also between the living and the nonliving. They explore an area of experience we call ‘political’ with a moral concern that comes through in the deliberate choice of words and tone.

Of the fifty poems collected here, forty one have been written during the last decade, while the remaining ones are selected from the earlier volumes. Poems like Terms of Seeing and A Pair of Eyes problematize the act of seeing. In Stray Cats we come across the line: “The horror is in the seeing.” The child who captures the spontaneity of a huge fountain of water in an expressive phrase, a weatherman who foresees floods, a man who sells fakes, the cuckold who lives on a tree – they come alive on the page as alternative human attitudes to everyday reality. As a bilingual writer and translator, Ramakrishnan is fascinated by the possibility of communication in whatever form it happens. In the sequence For All Thing Dying he seems to suggest that we can take neither language nor communication granted in our society. In his foreword, Keki N. Daruwalla says: “Because of its striking images, its unique perspectives and the unusual way he goes about transacting his poetic business, this volume of Ramakrishnan should leave a lasting impression on the reader’s mind.”

E.V. Ramakrishnan is a bilingual writer who has published poetry and criticism in English and Malayalam. He has published a study of modernism in Indian poetry titled, Making It Now. He has also edited a volume of translations of modern Indian poetry under the title, The Tree of Tongues. His earlier volumes of poetry are: Being Elsewhere in Myself (1980) and A Python in a Snake Park (1994). He teaches English at South Gujarat University, Surat.