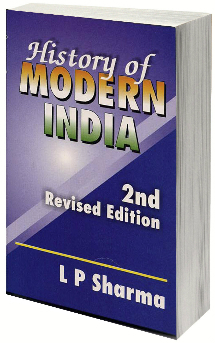 The present edition has been thoroughly revised, updated and substantially enlarged in view of the latest research in the field. Besides, several new topics and a chapter. ‘Causes of the Success of the British against Indian Rulers’ have also been added. The book covers the period of Indian history between 1707-1947 A.D. in a simple, clear and easy-to-understand language. It has been prepared after going through the syllabi of several Indian universities and efforts has been made to cover all possible topics including the economic impact of British rule in India, the movements of the left, the peasants and the labour etc. Latest works of reputed historians in form of books and research articles have been consulted in writing the book. Several maps, suggested readings at the end of each chapter, Bibliography and Some ideal questions at the end of the book have also been given as an additional help to the students. Primarily, the book is meant as a textbook for the students of B.A. (Pass and Hons.) of various universities. However, it provides a good background for the students of postgraduate classes and is useful for general readers as well and for those preparing for different competitive examinations.

L.P. Sharma has taught history for over three decades and was Reader in the Department of History, Shivaji College, University of Delhi.