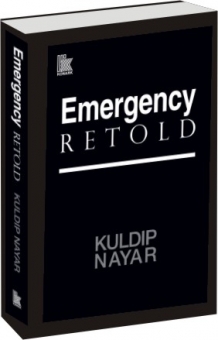 It all started with a by-election in Orissa in 1972. Nandini Satpathy was elected to the state assembly after spending lakhs of rupees. Gandhian Jayaprakash Narayan raised the matter of corruption with the Prime Minister. Her defence was that the Congress had no money even to run the party office. When he found no response, he took the issue to the nation. One thing led to another until JP gave the call that the battle was between the people who wanted the government accountable and the government which was not willing to come clean.’ Acclaimed author Kuldip Nayar says the true story behind Emergency, why it was declared and what it meant is relevant now since the driving force was corruption and corruption is the watch word again. With a new preface, the author reacquaints the current reader with the facts, lies and truths in an easy-to-understand, analytical style. He reveals the untold atrocities committed and the chief perpetrators and their modus operandi. A revelatory must-read on the 18 dark months of Democratic India’s history.

A veteran journalist and former member of Parliament, Kuldip Nayar is India's most well-known and widely syndicated journalist. He was born in Sialkot in 1923 and educated at Lahore University before migrating to Delhi with his family at the time of Partition. He began his career in the Urdu newspaper, Anjam and after a spell in the USA worked as information officer of Lal Bahadur Shastri and Govind Ballabh Pant. He eventually became Resident Editor of The Statesman and managing editor of the Indian news agency, UNI. He corresponded for The Times for twenty-five years and later served as Indian high commissioner to the UK during the V.P. Singh government. His stand for press freedom during the Emergency, when he was detained; his commitment to better relations between India and Pakistan, and his role as a human rights activist have won him respect and affection in both countries. Author of more than a dozen books, his weekly columns are read across South Asia.