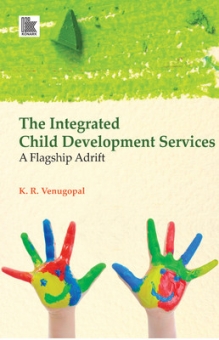 In this rights-based study of the ICDS programme sponsored by the Council for Social Development, New Delhi, Venugopal holds a mirror up to the way this flagship programme of the Government of India is faring and highlights its serious unmet expectations in implementation. These include inadequate enrollment of pregnant women, nursing mothers, children and adolescent girls who have a right to the ICDS services; grave cases of nutrition interruptions over extended periods; questionable quality of nutrition supplied; compromised growth monitoring; failure of convergence in health services including immunization and provision of crucial nutrients; grave inadequacies in training that impact adversely pre-school education and thus children's right to education and adolescent girls; and gross inadequacies of infrastructure and exploitative conditions of service affecting the effectiveness of anganwadi workers.

The study addresses all these issues and makes comprehensive recommendations calling for sensitive changes in the structure of the programme. A call is made for greater involvement of the PRIs and primary stakeholders in the programme. This whistle-blowing study distinguishes itself for its readiness to pinpoint the prevalence of corruption in the programme and the practice of discrimination against the dalits in some of the anganwadi centres audited. This book should be of great interest to social auditors, human rights defenders particularly in the area of child rights and gender rights, advocates of good governance and shapers of human development policy, including those in the government.

K.R. Venugopal (IAS) retired in 1995 as Secretary to the Prime Minister of India. While with the Government of Andhra Pradesh he held positions as Collector and District Magistrate and as Secretary to Government in the Departments of Planning, Social Welfare and Food. In the Government of India, he served in the Food Corporation of India, as Joint Secretary in the Ministry of Human Resource Development in charge of the Integrated Child Development Services (ICDS) and worked in the Prime Minister's Office (PMO) as Additional Secretary and later as Secretary, from 1990 to 1995. In 1992-93 he was the Prime Minister's personal representative and Commissioner on the Independent South Asian Commission on Poverty Alleviation established at the Colombo SAARC Summit of 1991 and co-authored the Commission's Report Meeting the Challenge. Venugopal was India's Chief Negotiator at the UN's preparatory processes in 1994-95 for the World Summit on Social Development (WSSD) and was also member of the delegation led by the Prime Minister to the WSSD held in Copenhagen in 1995. He served the United Nations in 1996 as Senior Policy Adviser on Poverty Policy for SAARC. He helped design a comprehensive Public Distribution System for the state of Andhra Pradesh in the early 1980s and later in the 1990s helped formulate, while in the PMO, a revamped Public Distribution System and the Employment Assurance Scheme (EAS) dovetailing rural employment for the poor with their food grains needs in the Public Distribution System, making for their comprehensive food security. He was Special Rapporteur to India's National Human Rights Commission (NHRC) between 1999 and 2006 to take forward the mandate of the Supreme Court of India to the NHRC on the laws relating to bonded labour in the southern region and also authored several investigative reports on violations of human rights. Venugopal has also authored Deliverance from Hunger: The Public Distribution System in India.