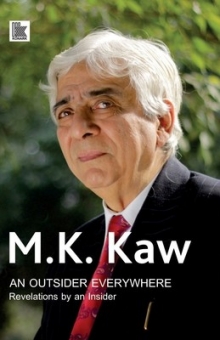 An Outsider Everywhere: Revelations By An Insider (Hardcover)

Autobiographies of civil servants generally make for banal reading. These are either exercises in self-glorification or attempts at pontification. This is an autobiography with a difference. M.K. Kaw, the author of Bureaucrazy fame is known for his style imbued with humour and pen dipped in satire. Here he takes a look at his own life, starting with a zany essay on why he is called Kaw, which means crow in Kashmiri. In one of the chapters, he refers to the phenomenon which led some of his younger colleagues to revel in the appellation Kawboy. The text is peppered with half-remembered lines of a childhood poem celebrating the exploits of Natha Singh, a truck driver of Delhi. He has not omitted to reproduce in its unexpurgated virility a naughty limerick he composed at a party about his chief secretarys non-performing member.There are revelations about the exploits of politicians and bureaucrats, as seen from the perspective of a poet who got trapped in the topsy-turvy world of bumbledom. Kaw has manfully resisted the temptation to deliver high-sounding sermons at hapless juniors in the service. He has instead concluded with tongue-in-cheek aphorisms camouflaged as pearls of wisdom.

Maharaj Krishen Kaw is a former member of the Indian Administrative Service (1964 batch). He was allotted to the Himachal Pradesh cadre. He held important posts like Director of Industries, Deputy Commissioner, Solan and Kangra districts, Secretary Personnel, Finance, Education, Culture and Public Relations. He was Principal Secretary to two chief ministers. At the Centre, his postings were in the Ministries of Rural Development, Defence and Finance. He was the Member Secretary of the Fifth Central Pay Commission, Secretary Civil Aviation, Principal Adviser (Education) Planning Commission and Secretary Human Resource Development. He retired in 2001. Kaw has written 15 books. He has published several books of poetry in English and Hindi, a novel, short stories, plays, middles and so on. He runs a monthly column Kawcaw and a blog with the same name.His earlier title Bureaucrazy is still a bestseller and The Science of Spirituality a classic on philosophy. Besides, he has authored a 13-episode serial Kehna Aasan Hai for Kashir channel of Doordarshan.