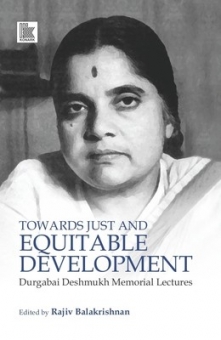 Durgabai Deshmukh, a source of inspiration to many, was a social worker, a political activist, a member of the Planning Commission, and Chairperson of the Central Social Welfare Board. She was also a builder of institutions. These include the Andhra Mahila Sabha, an institution she established relatively early in her life, and the Council for Social Development, which she founded in 1962, after her retirement as Chairperson of the Central Social Welfare Board. Since 1992, the Council for Social Development has been organising annual lectures in honour of Durgabai Deshmukh-the Durgabai Deshmukh Memorial Lectures. Grounded in Durgabai's social-development concerns and delivered by scholars and activists from diverse backgrounds, the Durgabai Deshmukh Memorial Lectures form the various chapters of this book. They examine social policy issues, critique development policy in the country and chart out paths that need to be tread.

Rajiv Balakrishnan holds a PhD in Population Studies and a Masters in Sociology from the Jawaharlal Nehru University, New Delhi; and a Bachelors degree in Economics from the University of Madras. In his professional career, he was on the faculties of prestigious research institutes in India. He served on the faculty of the Council for Social Development (CSD), New Delhi, for fifteen years, during which time he engaged in teaching and research, organised two seminars, and, for a period of three years, stewarded the Council's journal, Social Change, as its Joint Editor. After he left the CSD, he was reengaged as a Senior Consultant on an assignment to bring out this book. He is the principal author of four previous edited tomes.