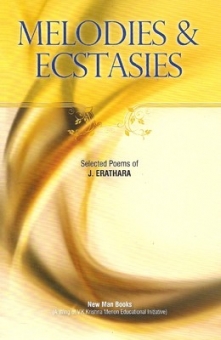 Second collection of selected poems of the poet. The first was published in 1999.

Poems
That flow from the experience of love in its myriad phases
That come from a heart wounded by man's inhumanity to man
That enrich the heart, deepen the mind, thrill the body and give wings to the spirit
Frank proclamations of freedom
Voices of Rebellion
Mystical Insights Gathered in Solitude
Adorations of Life and Death
You can hear the fluttering of the wings of a butterfly and feel the beauty of the flowers and of the vitality of the earth and the vastness of the sky
A book which celebrates life without any inhibition
Unforgettable for a variety of reasons
A luminous addition to the poems on Life and Love in world literature
A book to be treasured, read in solitude, relished with friends and to be presented to everyone you love.

I had the pleasure of publishing of the first book of Joseph's poems in 1999 and thus grew our friendship and my admiration for this rare human being. Erathara Xavier Joseph, known as E.X. Joseph, in the world of law and among his friends and in the Middle Class Employees' Movement of the 1960s (the judgment of the Supreme court in 1962 on Trade Union Rights of the Employees, cited in all the courts in India as 'O.K. Ghosh vs E.X. Joseph' is a classic in Indian Constitutional Law), has lived and is living many lives in one. I have often wondered how in one person such a passionate blending of the yearning for freedom, action for change, openness to truth and beauty, vision of the immensity of love, gift of creative expression, simplicity, innocence and total commitment to the quest for flights in consciousness can shape a charismatic personality who strikes you at the first sight and whom you love and admire more and more as you become closer to him.

The roads travelled by Joseph are diverse and at the same time integral - Dreamer who spent most of his growing years in Udayamperoor Village in Kerala watching clouds, hearing birds, tending flowers and cultivating the land; Brilliant student winning laurels and the way during his student days including the first prize in the Inter-Collegiate Oratorical Competition of the Madras University; Publisher and Editor of magazines all along including hand written magazines in the middle school and in the high school, college magazine, AUDIT magazine, Labour World, V.K. Krishna Menon's weekly on National and International affairs THE CENTURY. Rebel against authority in the college as well as later in active life; Hero of the battle against bureaucratic arrogance and for human rights; Senior Advocate of the Supreme Count of India, Prolific Writer, Gifted Orator, Original Thinker and above all a warm human being.This is the fifth book of the author. The other books are Songs of Love and other Poems, Krishna Iyer: Splendour of Humanism and Justice, A Legendary Battle for Human Rights and How to make Old Age Your Golden Age.