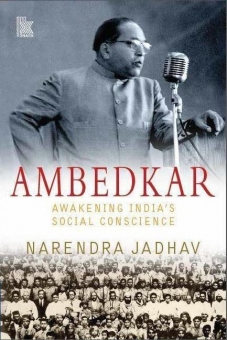 Dr Babasaheb Ambedkar was a great social reformer, a valiant champion of human rights and an emancipator of the downtrodden masses of India, who dedicated all his life to awaken the social conscience of modern India. No wonder there are more statues of Dr Ambedkar in India than any other leader in the history of our nation. It is hardly surprising that every year, on December 6 (his death anniversary), around 2 million Ambedkarites throng to Chaitya Bhoomi in Mumbai to pay homage to the hero they worship as their saviour. It is also not surprising that Dr Ambedkar was voted recently (August 2012) as the “Greatest Indian after Gandhi” in a nation-wide e-poll with an overwhelming majority.

This book is the first ever intellectual biography of Dr Ambedkar. While a fair amount of writings by Dr Ambedkar is available, there is only one English biography—the one by Dhananjay Keer, first published in 1954. Two other notable biographies of Dr Ambedkar are in Marathi and were written in 1960s. All the three biographers were close associates of Dr Ambedkar and had great advantage of being able to interact with him in person. On the other hand, these biographers did not have the benefit of accessing all writings and speeches of Dr Ambedkar, which became available only in the subsequent period.

This intellectual biography incorporates all of Dr Ambedkar’s writings and most important speeches that he delivered. Deviating from the conventional style of biography writing, this book focuses primarily on Dr Ambedkar’s intellectual making, evolution of his thinking and thought processes and the strategic stance that he took from time to time, over his momentous public life.

Narendra Jadhav is a well-known economist, policy maker, educationist, social scientist and best-selling author and holds a PhD in Economics from Indiana University, USA. Narendra Jadhav is currently serving as Member, Planning Commission (rank and status of Union Minister of State) with responsibilities covering Education, Labour-Employment-Skill Development, Social Justice and Empowerment. In addition, he has also been serving as a Member, National Advisory Council (NAC) chaired by Smt Sonia Gandhi.

Narendra Jadhav has written or edited 29 books including 12 books on Ambedkar, six each in English and Marathi, comprising of an intellectual biography, speeches (3 volumes each) and writings (2 volumes each). His other works include a trilogy on Rabindranath Tagore, Re-emerging India, Monetary Policy: Financial Stability and Central Banking in India, Untouchables, Outcaste A Memoir, and Monetary Economics for India. In addition, he has authored 30 major official Reports, contributed around 200 research papers in professional journals and delivered numerous lectures in national and international fora.

A celebrated public figure, Jadhav is recipient of as many as 65 national and international awards for his contribution to the fields of economics, education, literature, culture and social work. These include four Honorary D Lit Degrees and the title of the Commander of the Order of Academic Palmes by the Government of France.

You can buy the book (paperback) on Flipkart and Amazon India

You can buy the book (hardcover) on Flipkart and Amazon India