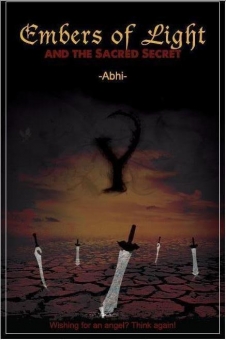 Embers of the Light and the Sacred Secret (Paperback)

It is best when some secrets remain hidden and some stories remain untold. But is destiny too kind to let this be?

A strange Y-shaped symbol in the sky terrifies a mysterious, alien race living secretly on Earth for centuries, and changes forever the fate of five human beings: a Brazilian street fighter, an American cop, a Chinese karate instructor, a Russian environmentalist and an Indian ad maker. Meanwhile, a geek in NYC is amazed to see his dreams grow more and more bizarre each day and meets an angel who isn't conventional in any way.

This is the story of how their destinies intertwine.

They could have had heaven but they did not take it.

The demons were against them and so were the angels but that did not scare them.

Destiny had already ruled against them but they choose to rebel.

Embers of Light is the story of five ordinary humans who choose the path of light over and above everything else ... even God.

Abhishek Gupta did his graduation from Delhi College of Engineering and post graduation, in management, from IMI Delhi. He specializes in branding, qualitative market research with a short stint in advertising. Also he had freelanced for Random Magazine, the first humor magazine of India. He is an idealist who loves creativity and enjoys laughing.