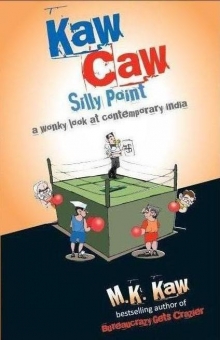 M.K. Kaw gained literary recognition with Bureaucrazy: IAS Unmasked, which was hailed by Khushwant Singh as the most readable book on the problems of administration he had ever read. This book, now available as Bureaucrazy Gets Crazier, has attained the status of a classic.

In this book, Kaw wields a facile pen. He roams across the realms of wit and sarcasm and demolishes individuals and institutions with merry abandon. Here, he lampoons netas, babus, jarnails, Kashmiris, the generation ill at ease with gizmos and gadgets and the ageing Methuselahs obsessed with disease and death.

“Mr Kaw has a sharp wit, a keen sense of the incongruous and a brand of gentle self-deprecatory humour that is rapidly disappearing in our pompous times. In this book, he invites us to take a wry look with him at politics, babudom, his native Kashmir and life’s inanities. Thank you, Mr Kaw, for the laughs, the chuckles, the sniggers and the smiles.”
Manas Chakravarty, Consulting Editor, Mint, HT Media Ltd and leading humour columnist

"M K Kaw's book is funny, insightful and topical. Buy it, read it. It'll make you chuckle and think at the same time.”
Jug Suraiya, satirist and columnist, former editorial opinion editor and associate editor of the Times of India

“Wonderful book! I particularly appreciate an insider’s insight and the fact that you not only know the sad plight of some of India’s once trusted institutions, such as the CBI, but that you also propose solutions so that they can recover their independence and true purpose.”
François Gautier, Editor-in-Chief, La Revue de Inde and reputed columnist and writer

“The author of the book is so unusually live, that he shakes the smug out of their Kumbhakarna dope.”
Keshav Malik, renowned Indo-Anglian poet, art critic, curator, and Padma Shri awardee

“An excellent collection of vignettes of the world around; some irreverent, some bitingly satirical, but always disarmingly humorous. A treat to read.”
Prabhat Kumar, former Cabinet Secretary and Governor of Jharkhand