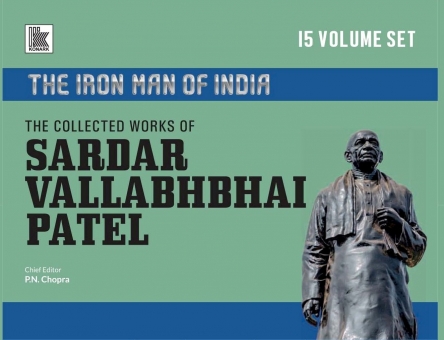 The Collected Works of Sardar Vallabhbhai Patel, Set of 15 volumes

Sardar Patel is one of the founding fathers of the Republic of India. As a leader of the Indian National Congress party, he made significant contributions to the freedom struggle and in the transfer of power at the time of India's independence. As the first Home Minister and Deputy Prime Minister of India, Sardar Patel made a unique contribution in the integration of all the princely states into a united nation and also established the all-India, civil services (IAS, IPS etc) which became the administrative backbone of modern India.

"Dr. P.N. Chopra has been the Editor of the Indian Gazetteers, Chief Editor of Who's Who of Indian Martyrs in the Ministry of Education and Chief Editor of the Towards Freedom Project. He has to his credit over forty authoritative works dealing with Indian history and culture, particularly the history of India's freedom struggle.

He had been assisted by Dr Prabha Chopra who is a well-known scholar with over a dozen authoritative works to her credit."