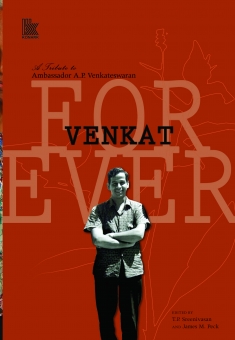 "‘Venkat Forever’ is a labour of love to which many admirers of Ambassador A.P. Venkateswaran have contributed. They include the family he left behind, celebrities, colleagues in the Indian Foreign Service and a multiplicity of friends from all walks of life. This is a tribute to his sterling qualities and his immense contribution to the making and implementation of Indian foreign policy. His erudition, diplomatic skills, fearlessness and sense of humour are captured here in short, but eloquent accounts.

The collection of essays, reminiscences, notes and letters were spontaneous outpourings of feelings at the time of his passing. Very little has been changed in the narratives to preserve their intense personal character.

The volume also contains Ambassador Venkateswaran’s oral history, recorded by Ambassador Kishan Rana as part of a project by the Ministry of External Affairs and the Indian Council of World Affairs. The addition of this first-person account of his life, experiences and observations has added great value to the book.

The editors, one of whom was a colleague in the Indian Foreign Service and the other his only son-in-law, worked from two continents to put together a volume worthy of the memory of an exceptional human being.

The book has abundant material for analysts of Indian foreign policy and students of international affairs. It will also be an inspiration for the younger generation of diplomats."

"Former Ambassador T.P. Sreenivasan held crucial posts around the world during his 37-year IFS career. An admirer of Ambassador A.P. Venkateswaran, he was handpicked by him as the High Commissioner to Fiji.

Post retirement, Sreenivasan has set up a foreign affairs think tank, helped the IAEA set up a plan for 2020, served on the National Security Advisory Board, participated in an election campaign, worked at the Brookings Institution in Washington, set up a Civil Services Academy, produced a TV show, taught at the Central University of Kerala and advised the Kerala government on education. He has published four books and written for reputed journals.

One of the most sought-after speakers across the country, he can be reached on Twitter @sreeniv

James Peck was the son of a military officer. The joy of travel was seared early into his soul and his career as an international oil explorationist wetted his wanderlust. In 1979, he was posted to Damascus, Syria, where he came in touch with the Venkateswaran family and he married Venkat and Usha’s daughter, Kalpana.

After 33 years together and many exotic postings, the marriage to Kalpana and their offspring Aila Allanna and Dylan Aditya remain Mr. Peck’s proudest achievements.

He will remain forever in debt to Venkat for finally agreeing to an alliance between Peck and his only child. In time, after many walks and philosophical discussions, Peck became Venkat’s son.

Now, as he grows older, organic art and ever-changing composition of gardening intrigues him."