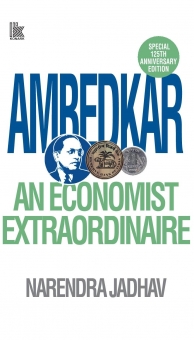 BABASAHEB AMBEDKAR was an intellectual colossus. He was a multi-faceted genius whose outstanding contribution in such diverse fields as law, sociology, political science, anthropology and comparative religion are well recognized. However, there is one crucial aspect of his multifarious genius that has remained surprisingly neglected far too long, namely, his phenomenal contribution as an economist. As a matter of fact, Ambedkar was easily one of the most highly educated Economists in our country, with MA and PhD in Economics from Columbia University, USA and DSc from the London School of Economics.

Ambedkar’s Ph.D. dissertation at Columbia University, USA (1917), ‘The Evolution of Provincial Finance in British India’ is a seminal contribution to the field of Public Finance, analysing evolution of the Centre-State financial relations in British India. His D.Sc. dissertation at London School of Economics (1923), ‘The Problem of the Rupee: Its Origin and Its Solution,’ his magnum opus, is a major contribution to the field of Monetary Economics. In 1942, when Ambedkar was appointed as a Member (Minister) in the Viceroy’s Executive Council, he emerged as an Economic Administrator par excellence and made remarkable contributions in respect of labour welfare, employment and skill development, power, water management, mineral resource management and public works.

The Indian society has done a great injustice to itself by ignoring the economic thoughts of Ambedkar. After all, his economic thoughts were not parochial. What Ambedkar always had in mind was in the best interest of the nation as a whole. To brand him only as a leader of the downtrodden in India is an insult to this great patriot. What is equally disheartening is depriving the Indian society of the benefit of his economic thoughts, an act which is self-defeating for India as a nation. It is, therefore, imperative to bring out the contributions of Ambedkar, both in the field of economics in general and in addressing India’s economic problems.

That is precisely what this book is about."

"NARENDRA JADHAV is an economist, educationist, administrator, author and a thought-leader. He holds a doctorate in economics from Indiana University, USA. He currently serves as a Professor, Durgabai Deshmukh Chair in Social Development, Equity and Human Security at the Council for Social Development (CSD) in New Delhi. Jadhav has recently been appointed as the Chairman, advisory Committee on RBI History: Volume V (1997-2007). He has earlier held positions including member, Planning Commission, Member, National Advisory Council (NAC), Vice-Chancellor of the University of Pune and Chief Economist, Reserve Bank of India.

Narendra Jadhav is a prolific writer. He has written or edited 35 books in three languages—18 in English, 12 in Marathi and 5 in Hindi—and has over 300 research papers, articles, besides 30 official reports on a range of public policy issues in India. Jadhav’s family biography in English: Untouchables has been hailed as an international bestseller, translated into 15 languages including French, Spanish, Korean and Thai, and has won the Sahitya Akademi Award (for the Punjabi version of the book).

He is shortly making a debut as an anchorman for a TV talk show on the Indian Constitution and is the recipient of as many as 67 national and international awards for his contribution to the fields of Economics, Education, Literature, Culture and Social Work. These include four Honorary D. Lit Degrees and the title of the Commander of the Order of academic Palmes by the Government of France.