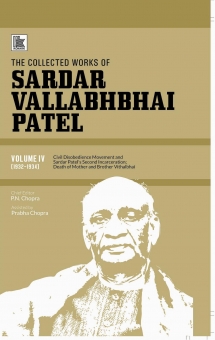 Volume IV (1932-1934) exhibits Sardar Patel having a harrowing time in jail with physical and mental sufferings along with personal tragedies. He refused to be released on conditional parole to perform the last rites of his brother Vithalbhai. After his release, he went on a tour of the various provinces encouraging people to vote. He was entrusted with the task of collecting money for the election campaign.