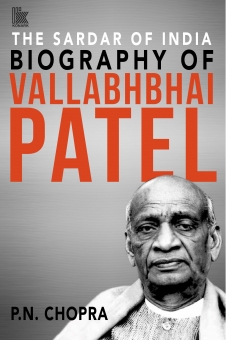 THE SARDAR OF INDIA: Biography of Vallabhbhai Patel (Hardcover)

An architect of modern India, Sardar Patel remained somehow a neglected personality in the contemporary echelons of the greats. He was a Gandhian—resolute, straightforward, pragmatic and a visionary. He was not only a freedom activist, but a deft policy-maker who was responsible in navigating the All India Congress from just a podium of mass movement to that of a party representing the political ethos of the nation through resounding victories in electoral politics. In independent India, he established himself as one of the foremost leaders, ready to guide the newly formed nation to its heights. Along with Nehru, they formed the ideal, but difficult duo destined to take the nation to the pinnacle.

Sardar, by that time had already earned the popular epithet of the ‘The Iron Man’. And true to it, he, within a span of two years of his office as Home Minister succeeded in the Himalayan task of uniting the 560 plus princely states into the union of India. Thus, he was inimical in giving birth to the republic of India.

This book maps his rise through the multiple phases of a grass root organizer, a freedom fighter, a mass leader, a craftsman of electoral politics, an insightful planner and the maker of modern India. Well-documented and researched in self-contained chapters, the writer has incisively argued out the reasons which pushed this charismatic karmayogi into cold storage. The reader will go through an exciting journey to discover how a villain is created out of a hero. Yet, posterity has showered the much-denied accolades in making him the Bharat Ratna.

P.N. Chopra was the Editor of the Indian Gazetteers, Chief Editor of Who’s Who of Indian Martyrs in the Ministry of Education and Chief Editor of the ‘Towards Freedom Project’. He has to his credit over forty authoritative works dealing with Indian history and culture, particularly the history of India’s freedom struggle. He has also edited the fifteen-volume series, The Collected Works of Sardar Vallabhbhai Patel.