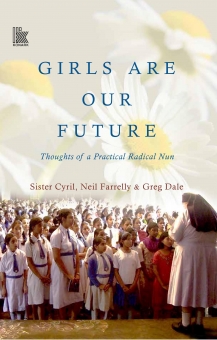 GIRLS ARE OUR FUTURE Thoughts of a Practical Radical Nun (Hardcover)

Girls Are Our Future is a vivid compilation of Sister Cyril’s thoughts on a wide variety of topics— education, life, sexuality, social issues, religion—that she has tackled throughout her tenure as Head of the Loreto Girls’ School, Sealdah in the city of Kolkata. Her powerful voice shines through in a series of interviews charting a long and illustrious career in the realm of education. Arriving as a young Irish nun, she completely immersed herself in Kolkata and the problem of how to help the slum children of the city. Victims of abject poverty and abuse, they found a safe haven under her affectionate care. Over the years, she has spearheaded innovative programmes like ‘Rainbow Homes’, the ‘Brickfields Project’ and ‘Barefoot’ teaching, which helped tremendously in educating children belonging to the poorest section of the community. The mission ‘each one, teach one’—whereby the older students themselves help educate those with little or no schooling—covered both the urban and rural areas of West Bengal and neighbouring states.

With love, compassion and patience she went on to conquer the obstacles of bureaucracy and the daily challenges of working with disadvantaged children. Gradually, effort and perseverance began to bear fruit as many of these once neglected girls grew up to be valued individuals, and now, as working women, wives and mothers they are contributing toward the betterment of society at large. Going around the world as a champion of education, she has spread the message of giving unconditional love to children, as she continues to fight—and inspires others to fight—for the empowerment of girls.

Sister M. Cyril Mooney is an internationally recognized educational innovator and the 2007 winner of the Padma Shri Award. She is a native of Ireland and a Sister of the Institute of the Blessed Virgin Mary (Loreto). Since 1956 she has been living and working in India, where she has emerged as a nationwide leader in bringing quality education to urban and rural poor children.

Neil Farrelly has been based in Asia since 1992, teaching, writing, and directing for schools, colleges and arts companies. He is a member of ISTA (International Schools Theatre Association), and the director of Nose2Nose, an arts company based in the UK. He regularly collaborates on creative ventures with other artists all over Asia. He lives with his Japanese wife and Italian dog in North Japan and can be found at www.nose2nose.org.

Greg Dale graduated from Princeton University, worked in New York theatre for 10 years, and has been directing and acting in Broadway-level theatres, movies, TV and commercials in Japan since 1991, working with many of Japan’s top stars. He has written three screenplays for Hollywood and is fluent in English, French, Japanese, and Spanish. He is working on a one-woman play based on this book.