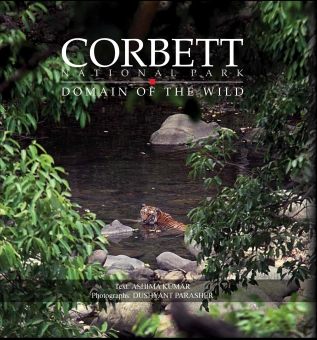 By Text by Ashima Kumar and Photographs by Dushyant Parasher

Corbett National Park is an important piece of our environmental heritage. This precious landscape is not only a reminder of how green, clean and beautiful our world once was; it is also the corner stone of India’s conservation history. It was here in 1936 that the first National Park of India was established. In 1973, when Project Tiger was launched, Dhikala in Corbett National Park was chosen as the venue for the unveiling of that historic event.

A collection of some awe-inspiring environment and wildlife images and well-researched complementing text makes Corbett National Park—Domain of the Wild, a visual delight and a good informative read.

The book is divided into three informal sections. The first part deals with the history of the area, the impact of unregulated hunting and trophy hunters of the Raj era. It also delves into the large scale deforestation that took a toll on the environment and the wild animals. It further describes the dawn of conservation consciousness that eventually established this wilderness as the first National Park in India.

The second part gives a glimpse of the beauty that is Corbett; with its magnificent wildlife from the largest land mammals to the smallest insects. Corbett is home to the Bengal tiger, the Asian elephant, four species of deer, varied smaller mammals, reptiles and a large number of bird species.

The last section looks at the threats to our precious environment and wildlife and ends with a note on India’s responsibility as a ‘global citizen and custodian’ of the world’s largest population of not only tigers, but also of many other species threatened worldwide.

Ashima Kumar is an environment and wildlife enthusiast who shares the boundary of her living space with the Aravali hills in NCR region. Leopards, blue bulls, jackals, hyenas and a wide variety of birds have always had unhindered access to the water hole on the grounds of her family home.

She started exploring Corbett National Park about twenty years ago with her environment-conscious husband Kumar Karun Krant. Corbett has virtually been her training ground where she gained firsthand knowledge of the ways of nature and wildlife. Her long exposure to this ‘First amongst all National Parks of India’ finally prompted her to pen down her experiences.

She has been trekking extensively in the hills of Uttarakhand and contributing her travel accounts to many publications. This is her first book.

Dushyant Parasher was trained to be a graphic designer and initially worked as a creative director in advertising during the mid-1970s. Now, for the past thirty years he has been a hard-core environmentalist, wildlife photographer and writer.

His tireless campaign against the degradation of Valley of Flowers in Garhwal Himalayas during the late-1970s finally resulted in the valley being declared a ‘National Park’ to preserve its unique bio-diversity.

In 2003, he received Sir Edmund Hillary’s ‘Himalayan Environment Trust Award for valuable contribution to the cause of Himalayan environment’.

In October-November 2010 he was part of an international expedition that travelled down the Brahmaputra River through Tibet-India and Bangladesh. It was a two month long, 2,800 km river journey done in inflatable boats.

With seven pictorial books on environment and wildlife to his credit, he is one of the most prominent nature and wildlife photographers of India.