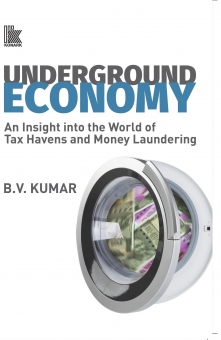 UNDERGROUND ECONOMY: An Insight into the World of Tax Havens and Money Laundering (Paperback)

For any banking institution, financial assets are their life and blood. To attract money away from the developed nations, banks and financial institutions in tax havens necessarily offer least stringent money laundering standards, minimum tax liability and maximum secrecy. As a corollary, this leads to a higher risk of infiltration by criminal organizations that seek financial secrecy to conceal their assets. The banks and fiducial consultants in tax havens assist their clientele through legal instruments such as corporations and trusts.

From organized crime to tax havens, this book interlinks the nexus between hidden money, drug trafficking, serious crime, and money laundering. The author delves into detailed case studies of banks and financial institutions to unravel the deep roots that cause this scourge. The author also touches upon financial secrecy laws and how they encourage the laundering process.

He also held the post of Member, Central Board of Excise and Customs. Kumar has represented India on various occasions such as International Conference held at Vienna for drafting the UN Convention against Illicit Traffic in Narcotic Drugs and Psychotropic Substances, 1988, and various Interpol meetings held between 1985 and 1988 and led the Indian delegation for SAARC Technical Committee on Drugs. Besides, he was elected President of the Drugs Committee during the Interpol Conference held in 1987, in Nice.

He has authored The Preventive Detention Laws of India and co-authored The Narcotics Drugs and Psychotropic Substances Laws of India. He has published a number of papers on law, taxation, terrorism and organized crime.