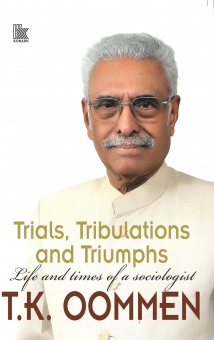 Trials, Tribulations and Triumphs: Life and Times of a Sociologist (Hardcover)

Trials, Tribulations and Triumphs is not a biography but a work-o-graphy. It details the life of one of the most renowned sociologists in India and maps his professional journey. The author started his career at Delhi University and shifted to JNU in 1971 when the university started. In JNU, he was stigmatized because of his neutral political position. He was elected as the president of International Sociological Association, the only sociologist to occupy this position so far from Asia and Africa. The narratives regarding this metamorphosis of the author could be inspirational to peers and subsequent generations. Similarly, the account of ‘travails of publishing’ graphically unfolds the challenges to be faced by emerging as well as veteran authors.

Anecdotal in nature, the book provides insights into the functioning of the academic world through the discipline of sociology not only nationally but even globally. A world in which knowledge production and dissemination are becoming increasingly critical, the book also discusses the larger social and political context in which these activities are undertaken. It also brings out the lack of professionalism among Indian sociologists.

Written in a very lucid way, this book will be of interest to social scientists, scholars of media studies and general readers.

T.K Oommen is at present Professor Emeritus at the Jawaharlal Nehru University, from where he retired in 2002 after being a professor for 26 years. He was President of International Sociological Association as well as that of Indian Sociological Society. He was a Visiting Professor/Research Fellow at several universities including University of California, Australian National University, Institute of Advanced Studies at Budapest and Uppsala. He has authored twenty books and edited ten books including Alien Concepts and South Asian Reality (Sage 1995), Citizenship, Nationality and Ethnicity, (Polity 1997), Pluralism, Equity and Identity (OUP 2002), His latest book is: Social Inclusion in Independent India: Dimensions and Approaches (Orient BlackSwan 2014/2016). He is a recipient the V.K.R.V. Rao Prize in Sociology (1981), G.S. Ghurye Prize in Sociology and Social Anthropology (1985) and the Swami Pranavanda Award in Sociology (1997). Oommen was a member of Prime Minister’s High Level Committee (The Sachar Committee) to study Social, Economic and Education Status of the Muslim Community in India (2004 to 2006). He was a National Fellow of the Indian Council of Social Science Research, 2008-2010. Oommen was conferred the Padma Bhushan in 2008 in recognition of his contribution to higher education.