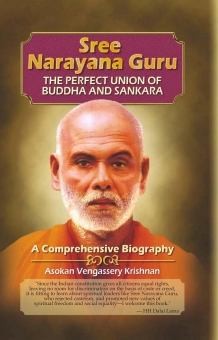 Sree Narayana Guru: The Perfect Union of Buddha and Sankara: A Comprehensive Biography

Even though Advaita as a doctrine was extracted from the Upanishads by Sree Sankara, the 8th century sage and philosopher, it was Sree Narayana Guru who transformed the Advaita philosophy from an elite theoretical doctrine into a relevant principle of practical applicability. Thereby, he expanded its scope to effect phenomenal social changes, and enabled one of the most profound yet bloodless social revolutions in history.

As a social reformer, Sree Narayana Guru's impact was unmatched in history. Those who had been denied basic human rights for centuries were able to experience dramatic changes in their lives due to the awakening caused by Guru's teachings on self-improvement and self-empowerment. The focus on education, organization and entrepreneurism that he insisted on to secure freedom, strength and prosperity remains an ideal and timeless model for peaceful changes in the condition of suppressed and marginalized people of any society.

The defining theme of his vast philosophical writings is the oneness of human race transcending all peripheral differences. His earnest call for mutual respect and understanding among all religions is a lesson that is still to be learned.

The intention of this well-researched and lucidly-written book is introduce to readers the illustrious life of the sage, Sree Narayana Guru, who emerged as the conscience of Kerala in the twentieth century.

Asokan Vengassery Krishnan hails from a small village near Changanassery in the district of Kottayam, Kerala. After finishing high school, he earned a BS degree in Mathematics from the University of Kerala. While working for the Kerala government's Department of Education, he immigrated to USA in 1985 and continued his education there.

He took a BS degree in Accounting and MBA from Widener University, Pennsylvania. He also attended the University of Pennsylvania and other institutions in the region and studied English Literature, Psychology, Sociology, Western History, Ethics, etc.

Asokan has been working at a prestigious international corporation headquartered in Philadelphia, USA for almost three decades. He returned to India for a few years and it was during this time that he began writing this book. After coming back to Philadelphia, he continues to work for the same organization as a senior accounting professional.

He has published numerous articles on sociopolitical issues in various magazines and newspapers in Kerala as well as in many publications of the Indian diaspora in the United States. For more than fifteen years, he has been a columnist for Kamaladalam, a Malayalam monthly from Kottayam, Kerala. Asokan Vengassery published American Diary, a collection of articles in Malayalam, in 2004 with a foreword written by Perumbadavam Sreedharan, famous Malayalam novelist and a former president of the Kerala Literary Academy. Asokan currently lives in Philadelphia, USA and he frequently visits India. Philosophy and History have been his passion.