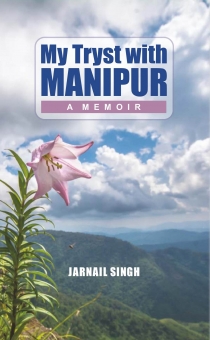 My Tryst with Manipur: A Memoir

My Tryst with Manipur by former Chief Secretary of Manipur, Jarnail Singh, describes the amazing journey of a simple country boy from Punjab who spent 23 years in Manipur, trying to understand its people, solve their problems and focus on development.

The lucidly-written memoir, laced with gentle humour, is an anecdotal narrative of his jottings and vivid recollections when he served in the state, first as a Sub-Divisional Officer and later as the Chief Secretary. From weeklong tours on foot in the interior hill areas, to taking initiative to secure about 8,900 sq km area of the so-called 'liberated area' by the militants in 2004, to improving the law and order situation, strengthening the bureaucracy, streamlining pension payments, supplying electricity and drinking water—all have been well documented in this book. It reveals Singh's zeal, determination and innovative style of functioning.

In a nutshell, the book provides the readers with a window into the administrative transformations Manipur has undergone over the last five decades, and what one officer can help in achieving if he is honest, sincere and devoted to his work.

Shirui Lily, the subject of the book cover, is a rare terrestrial lily that grows only on the upper reaches of the Shirui Hill range in Manipur. Nowhere else in the world will you find this flower! The photo was taken by nature photographer Priyojit Akoijam at a height of 8,500 ft above sea level. Declared as the state flower of Manipur in 1989, the lily is today considered an endangered species. The bell-shaped pale pinkish flower blooms only between mid-May and mid-June every year.

Jarnail Singh joined the Indian Administrative Service in 1974 after completing MSc Engineering from Punjab Engineering College, Chandigarh. He was allotted the Manipur- Tripura cadre. Out of his total service of over 35 years, he served for about 19 years in Manipur and 13 years with the Central Government. The important positions held by him included: Joint Secretary to the Prime Minister from 1996- 2004, Chief Secretary of Manipur from August 2004 to July 2008 and Secretary to the Government of India. His eight-year stint in the Prime Minister's Office is among the longest by any officer, where he served under four Prime Ministers. He also served as the Advisor to the Chief Minister of Manipur on 'Infrastructure and Power' (2012-2017).

Singh attended the Kennedy School of Government of the Harvard University in 1988-89 and completed Masters in Public Administration in Public Policy and Management under the Edward S Mason Program.

While he was the Chief Secretary of Manipur, Singh introduced many initiatives such as 'Computerized Personnel Information System' and the Manipur Public Servants' Personal Liability Act 2006, which improved the public administration of the state. For these initiatives, he received the Prime Minister's Award for Excellence in Public Administration for the year 2007-08. Singh, who believes in quick decision making and innovation, wherever possible, pushed to improve the delivery of public services in the state.

Singh is now the CEO of 'Project Appraisal Consultants LLP' that specializes in conducting capacity building programmes as well as providing consultancy in project appraisal, risk analysis and risk management.