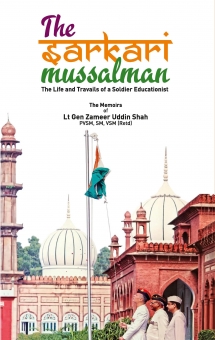 The Sarkari Mussalman: The Life and Travails of a Soldier Educationist (Hardcover)

In this book, Lt Gen Zameer Uddin Shah explains the intriguing title of The Sarkari Mussalman (Government stooge), which those in government service are often accused of being when they ‘go by the rules’.

Besides covering the span of his life of the past 70 years, from his education in the family madarsa, then in a boarding school, his Army service of 40 years, and the 1971 Bangladesh Liberation War, the author also deals in detail with how he led the Army Division that quelled the riots in Gujarat in 2002, in the aftermath of the Godhra train burning. In the chapter, the author has also put forth his views on the role of Police, the Para Military Forces and the Army.

He also details in an interesting manner his three years stint in Saudi Arabia as the Defence Attache, as well as his term in the Armed Forces Tribunal. As Vice Chancellor of Aligarh Muslim University, the author had to contend with some challenging issues. During his final year at AMU, the varsity was ranked by international ranking agencies as the top most university of the country. He strongly feels that Indian Muslims need education, as discrimination, which certainly exists, is against the less educated.

The book would interest a wide cross section of readers, especially, the young who wish to opt for a military career and of course those who wish to know what soldiering is all about.

Born on 15 August 1948, Lt Gen Zameer Uddin Shah is an alumnus of St Joseph’s College, Nainital, the National Defence Academy and the Indian Military Academy. He spent 40 years in the Army.

The author participated in the operations at Longewala (Jaisalmer sector) in the 1971 war for liberation of Bangladesh. He has participated in counter-insurgency operations in North East India and Punjab as well as Operation Parakram'. He also led the Army Division that quelled the 2002 Gujarat riots. He retired as Deputy Chief of Army Staff (P&S) in 2008. He later served at the Armed Forces Tribunal, Principal Bench, New Delhi. He quit that to become Vice Chancellor of Aligarh Muslim University from 2012–2017