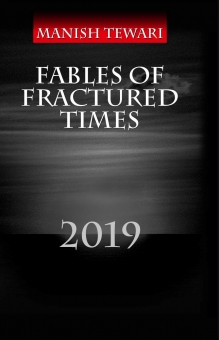 The Fables of Fractured Times (Paperback)

The Fables of Fractured Times is a compilation of articles written by Manish Tewari between 2017 and 2018 which have appeared in the columns of leading newspapers. The articles reflect his views on a wide array of issues, trends and events in the domestic and international arena in today's fractured times. The country's widening governance deficit, the crises in Indian economy and the role of the media in democracy are some of the issues expertly analysed in this book.

The author has also reflected on issues that have disturbed the social harmony in the country, taking a critical view of the current government's stance on the matter. He has emphasized on the need for electoral reforms and mechanisms to democratize democracy in India. The book deals with India's engagement with different nations and the challenges of its foreign policy. It explores the contemporary concerns in India's geopolitics, stressing on the need to prevent turmoil in Indo–Pak relations and take a firm stand on ties with China.

Despite the book adopting a critical stance on a wide array of issues and policies of the current government, the author however remains optimistic about the capability of the strong Indian political system and democracy.

Currently, he is the National Spokesperson and Secretary of the Foreign Affairs Department of the Indian National Congress. He has been appointed member of the Congress party's Publicity Committee for the 2019 Lok Sabha elections.

A prolific writer, Tewari has published two books, Decoding a Decade (2016) and Tidings of Troubled Times (2017).

“Manish Tewari is an exceptional member of his generation of politicians wielding a pen that is both provocative and perceptive. These essays demonstrate his grasp of both public policy and international affairs.”