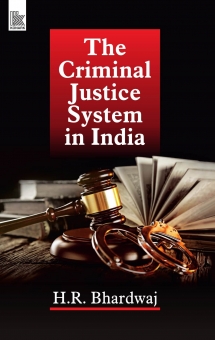 Crimes occur in every society. But the true test of a society lies in the way its criminal justice system functions. Unfortunately, the standards of criminal justice system have been on a decline in India and have been a cause of worry for those at the helm who have been working tirelessly to uphold the values espoused by the country's judicial system. While the reason for the current scenario mainly rests with non-upgradation of the system, The Criminal Justice System in India emphasises the fact that the judges and lawyers have a duty towards society and their integrity and legal acumen determine the quality of justice.

In a democratic society governed by rule of law, the State has a right to do what is fair and just. At the same time, the legitimate claim of the citizens should not be defeated.

This book has reviewed the various arms of judiciary and has attempted to present the criminal justice system in India in a new perspective with focus on human rights and civil liberties.

H.R. BHARDWAJ was the Governor of Karnataka from 2009 to 2014 and the acting Governor of Kerala from 2012 to 2013. He is a member of the Indian National Congress. He holds the record of having the second longest tenure in Law Ministry since independence. As a law minister in the Manmohan Singh-led UPA I government, he introduced the concept of rural courts. His earlier stints as a law minister in the Rajiv Gandhi government and the P.V. Narasimha Rao government had earned him the reputation of being a crusader for improvement in judicial infrastructure and computerization of law courts. In his capacity as a minister, he has introduced wide-ranging reforms, particularly in the field of legal aid, legal education and improvement in service conditions of Supreme Court and High Court judges.

Bhardwaj, who was conferred an honorary Doctorate degree in Law by Maharishi Dayanand University, Rohtak and honorary fellowship by the Institute of Company Secretaries, has authored two books: Law, Lawyers and Judges and The Soul of India.