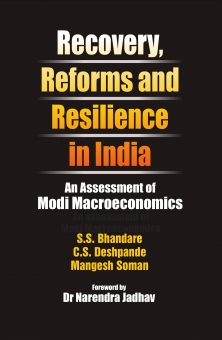 Recovery, Reforms and Resilience in India: An Assessment of Modi Macroeconomics (Hardcover)

The Modi government will be known for the economic decisions it took during its five year tenure. Be it reforming the tax system, overhauling a century-old bankruptcy law, fighting corruption with demonetisation or leapfrogging in the World Bank's ease-of-doingbusiness global rankings, India has risen among its peers in terms of economy.

Recovery, Reforms and Resilience in India – An Assessment of Modi Macroeconomics focuses on the analysis and assessment of India's economic performance since 2014 till 2019. With the economic trends in the previous five years as a backdrop, the book apprises the readers of the behaviour of key indicators such as growth, stability and inflation in the last decade since 2009. In addition, the book also offers some critical policy recommendations for the government which will assume power soon.

S. S. Bhandare is a Director on the Board of Saraswat Cooperative Bank. He was the former Economic Advisor to the Tata Group and former Chief Economist of Maharashtra Economic Development Council. He has undertaken numerous assignments in the field of economic consultancy, involving industrial and corporate research and corporate planning. He has co-authored two books, Eventful Years with Ajit Karnik and Journey Beyond Liberalization with C.S. Deshpande and R.G.Katoti.

C.S. Deshpande is a Professor of Economics at Welingkar Institute of Management, Development and Research, Mumbai. His professional and research experience of about three-and-a-half decades spans academics, policy think tank, corporate sector and trade-related institutions. He was a Member of the Working Group on 'Employment Policies' in the erstwhile Planning Commission and a Member of 'Expert Committee on Infrastructure' under the Ministry of Environment and Forests. He has written several articles in English as well as in Marathi on many issues dealing with India's ongoing economic reform process.

Mangesh Soman is a Mumbai-based corporate economist. His work experience over the last two-and-a-half decades spans media, industry chambers and corporate sector. He has contributed articles to leading business dailies including The Financial Express, Mint and The Hindu Business Line, and is a columnist in Loksatta, a Marathi daily. His key areas of interest include risk management, currency markets, business cycles and fiscal and monetary policies.