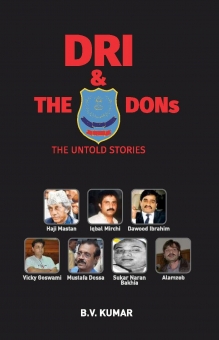 Transnational smuggling will not stop as long as the demand for goods and services exist, since it will create its own supply. The smugglers operate on the principle of 'comparative advantage'. DRI & The Dons — The Untold Stories provide readers an insight into the challenges faced by the Indian law enforcement agencies involved in combating organised crime. It covers some of the important cases unearthed by the DRI officers who refused to buckle against any threat, even at the cost of life and limb, while dealing with major smuggling syndicates.

A few of the gangsters operating in the underworld of Bombay (now Mumbai) held not only the city to ransom but also beyond. They were a law unto themselves. An effort has been made to tell the real stories of real people who were involved not only in smuggling of gold, drugs, arms and ammunition, extortion and contract killings (supari) among others but also indulging in anti-national activities. The shadow world in which they operate slowly but steadily penetrates into the legitimate economies with criminal profits. Sooner or later a stage will come when they will disrupt the political order in which democracies operate.

B.V. Kumar joined the Indian Revenue Service in 1958 and held various key positions such as Director General, Revenue Intelligence; Director General, Narcotics Control Bureau; Director General, Economic Intelligence Bureau and Member, Central Board of Excise and Customs amongst others in his 35 years of service. During his tenure, many syndicates involved in organised economic crime that operated transnationally including smuggling of contraband and drugs, were neutralised. The Illustrated Weekly of India had dedicated its front cover (October 11-17, 1987 issue) and described him as ‘Super Sleuth’. Kumar has represented India at various international conferences, including Interpol meetings held between 1985 and 1988. Post his retirement, Kumar was a visiting lecturer at various institutions, including IIMs (Ahmedabad and Bangalore), the National Defence College, New Delhi and the National Police Academy, Hyderabad.