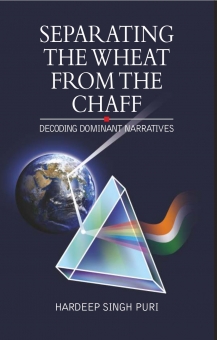 SEPARATING THE WHEAT FROM THE CHAFF: Decoding Dominant Narratives (Paperback)

One motivation, though by no means the only one, to compile my articles was to showcase how India's governance has evolved from the time I started writing in 2013. The last years of the UPA 2 government were characterised by a sense of despondency in decision-making. India's image across the world was of a nation beleaguered by corruption. Cut to 2019, India is among the fastest growing economies in the world. Multilateral institutions such as the IMF, World Bank, and rating agencies such as Standard & Poor's and Moody's are holding India up as the template for economic growth and good governance.

Having spent over four decades in the world of diplomacy, Hardeep Singh Puri has had a ringside view of major developments both within India and the outside world. After retiring from the Foreign Service in 2013, the author decided to share his experience with the public at large through columns on a range of public policy issues that impact the lives of the average Indian citizen. Separating the Wheat from the Chaff: Decoding Dominant Narratives is a compilation of some of his writings from the period 2013–18 and each article in the eight chapters gives an incisive account of the subject at hand. It reflects the author's unique writing style—he is not known for mincing his words and doesn't hesitate in calling a spade a spade.

HARDEEP SINGH PURI has had a distinguished four-decade career in diplomacy. A 1974-batch Indian Foreign Service Officer, Puri served as Permanent Representative of India to the UN in Geneva (2002-2005) and New York (2009-2013). He was Ambassador to Brazil (2006-2008) and Deputy Chief of Mission to the UK (1999-2002) besides holding diplomatic posts in Japan and Sri Lanka. Puri presided over the UN Security Council in August 2011 and November 2012, and chaired its Counter- Terrorism Committee in 2011-12. He is presently Minister with Independent Charge for Housing & Urban Affairs, and Civil Aviation, and Minister of State for Commerce and Industry in Prime Minister Narendra Modi's government. He has also authored two books, Delusional Politics (2019) and Perilous Interventions: The Security Council and The Politics of Chaos (2016).