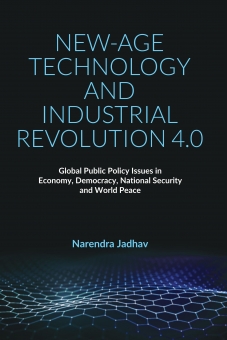 This book is about the emerging New-Age Technology underlying the rapidly unfolding Industrial Revolution 4.0, its impact on economy and society, and implications for public policy in a global setting.

Part One of the book presents a primer on the New-Age Technology and its constituents, including Artificial Intelligence and Machine Learning, Big Data Analytics, Robotics, Blockchain, Automated Technology, Additive Manufacturing, Internet of Things and Augmented Reality.

Part Two of the book discusses the potential impact of the New-Age Technology on economic growth, employment, socio-economic inequalities and human development besides the evolving Banking-Finance 4.0.

Part Three of the book dilates on the associated global public policy issues, including Right to Privacy, social media and democratic governance, cyber security, surveillance and the threat to national security and world peace arising from weaponization of technology. This part is rounded-up by discussion of issues relating to regulation and strategic development of the New-Age Technology.

While the entire book is in the global setting, the final part of the book includes a brief chapter on India as a case-study.

This book, probably the first of its kind, bringing it all together—technology, economy, society and national security, would benefit individuals, businesses, corporates, civil society as well as policymakers around the world.

Dr. Narendra Jadhav is a Member of Parliament - Rajya Sabha (nominated by the President of India). Professionally, Jadhav is an economist, educationist, administrator, author and a thought-leader.

Holding a Ph.D in Economics from Indiana University, USA, Jadhav has had an outstanding professional career spanning over four decades in public service. Some of the distinguished positions held by Jadhav with distinction, include Member, Planning Commission; Vice-Chancellor, Pune University; Adviser, International Monetary Fund (IMF), and Chief Economist, Reserve Bank of India.

Jadhav is a prolific writer in three languages: Marathi, English and Hindi. He has written or edited 40 books—22 in English, 13 in Marathi and 5 in Hindi—and has over 300 research papers and articles to his credit, besides 31 official reports on a range of public policy issues in India. Jadhav's family biography in English: Untouchables (Simon and Schuster, USA) is an international bestseller, translated into 15 languages, including French, Spanish, Korean and Thai.

A celebrated public figure, Jadhav is recipient of as many as 70 national and international awards for his contribution to the fields of Economics, Education, Literature, Culture and Social Work. These include four Honorary D.Litt. Degrees and the title of the 'Commander of the Order of Academic Palmes' by the Government of France.