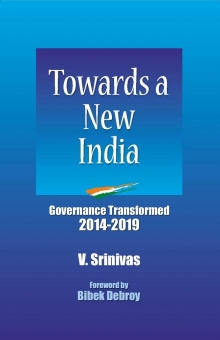 India's welfare state programmes have undergone a massive digital transformation in the past five years. The three big projects that symbolize the rise of a New India are the universal issues of 120 crore* Aadhaar cards, opening of 31.6 crore* Jan Dhan bank accounts and the construction of toilets to cover 85 per cent* of the population.

Towards a New India – Governance: Transformed 2014-2019 offers readers a glimpse of the numerous challenges in implementation of various welfare state policies. It depicts the success stories of the Swachh Bharat Mission, Ayushman Bharat, Jan Dhan Yojana, Ujjwala Yojana and Pradhan Mantri Aawas Yojana across the country. In addition, it also throws light on the massive strides made under Digital India, Skill India and Make in India with interviews and the author's Implementation experience in a leadership role. India's fight against corruption and the efforts in improving justice delivery systems have been presented taking the readers close to action. Finally, the challenges to good governance are presented. The encouraging message from the author is New India is well and truly achievable. *Figures as of October 2018.

V. SRINIVAS, IAS is currently Additional Secretary to Government of India in the Department of Administrative Reforms and Public Grievances, Ministry of Personnel, Public Grievances and Pensions. He served as Deputy Director (Administration) at the All India Institute of Medical Sciences, Director General, National Archives of India and Joint Secretary in the Ministry of Textiles and Culture in the years 2010-17.

V. Srinivas served as the Chairman of the Board of Revenue for Rajasthan and Chairman of the Rajasthan Tax Board in 2017-2018. In 2017, he was awarded the Indian Council of World Affairs Book Research Fellowship for his first book, India's Relations with International Monetary Fund 1991-2016 — 25 years in Perspective. He is a senior civil servant, an academician and an institution builder par excellence.

Towards a New India – Governance Transformed 2014-2019 is his second book.