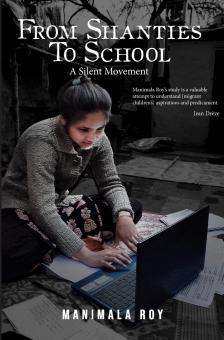 From Shanties to School: A Silent Movement (Hardcover)

Invisible to many, the 1991 Economic Reforms unleashed a silent revolution in the festering city slums. Migrant workers saw the possibility of a large number of white-collar jobs being available to their children once liberalisation opened up many sectors of the economy. With some education, they knew, their children would be able to land low-level jobs in sectors like telecom, civil aviation, retail and automobiles.

Buoyed by such prospects, they sent their children to school, often private schools, paying hefty tuition fees. Without any government intervention a quiet social movement took off with far-reaching consequences.

As a result, the country’s literacy scene got a new boost, the blows of child labour were softened and within a generation the migrant community moved up socially and economically with their children becoming part of the organised sector. This untold story has been traced, meticulously researched and chronicled in From Shanties to School with a wealth of data and case studies.

This is till date the only scholarly work combining the fields of economics and education to establish the deep linkages between India’s economic liberalisation and the new wave of literacy in the soft underbelly of a metropolis. Researchers, policymakers, legislators, NGOs and activists will benefit from this book.

Dr Manimala Roy, an economist by training, later diversified into the field of education to produce work combining both disciplines. As an educationist and literacy campaigner, she has focused on deep linkages between early schooling and the availability of white-collar jobs. Educated at Lady Brabourne College and Jadavpur University, Kolkata and University of Delhi,

Dr Roy has been associated with a number of grassroots initiatives in the field of literacy. In this book, she conclusively established that the surge in literacy in the 1990s could be adequately explained by the 1991 economic reforms.

She writes on issues of education in newspapers and journals. Dr Roy is the principal of Basava International School, Delhi.