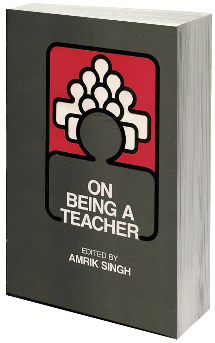 On Being A Teacher (Paperback)

On Being a Teacher is a bold and imaginative attempt at collecting and editing the experience of over a dozen teacher-scholars of this country. The problems and solutions of the teaching profession at this point of time are highlighted. The galaxy of writers include some former vice-chancellors, principals and educational administrators.

Amrik Singh, one of the best-known authorities in the field of education, has held several important positions, including Vice-Chancellor of Punjabi University. In 1982 he was awarded the Tom Symons Award of the Association of Commonwealth Universities. He has been Chairman of a committee appointed by the Government of Andhra Pradesh to review the programmes and performance of the various universities in the State.