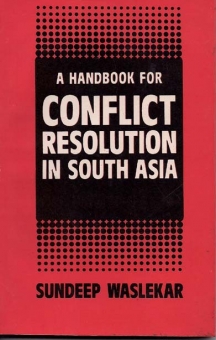 A Handbook for Conflict Resolution in South Asia (Paperback)

Modern conflict resolution has emerged as an independent discipline since the 1980s. In many parts of the world training in coflict resolution is imparted through workshops especially designed for diplomats, military officers and politicians interested in negotiating peace. This handbook is addressed to political leaders in South Asia who wish to participate in the process of conflict resolution. It combines the knowledge of concepts and techniques developed in the West with the political realities in South Asia. The handbook also contains a manual for organizing workshops including a detailed report on the first such workshop conducted in South Asia in May 1995. Besides practitioners, scholars and researchers in the field of conflict resolution should find this pioneering document of immense benefit in their work.

Sundeep Waslekar is the director of the International Centre for Peace Initiatives, Bombay and the editor of its bi-monthly journal Peace Initiatives. He is consulted on issues of regional security and co-operation by leading think-tanks in India and abroad. He writes a regular column for Asian Business (Hong Kong) and has published articles in about forty newspapes and periodicals published from North America, Europe and Asia. His other publication include eight monographs and two books, The New World Order (Konark, 1991) and South Asian Drama: Travails of Misgovernance (Konark, 1995). He was educated at Oxford University, UK, on a scholarship awarded in a global competition.