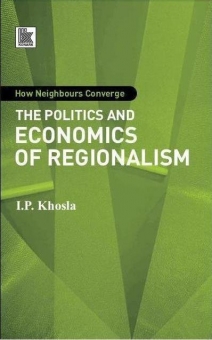 How Neighbours Converge: The Politics and Economics of Regionalism (Hardcover)

Though there are exceptions, neighbours are increasingly inclined to converge naturally in today’s world. It was not always so. From Kautilya onwards, sagacious thinkers have told us it is natural for neighbours to be enemies. In the twenty first century, however, as economic competition replaces military and strategic rivalry in the relations between nations, it has become the norm for them to look across their borders with economic cooperation in mind: trade, investment, the exchange of services, other complementarities and common interests that will serve to make them more competitive.

There are other factors too. Geographical propinquity, the unities of history, cultural commonality, language spilling across borders, all make the neighbourhood a comfort zone for working together. It also then becomes a zone of peace.

Regionalism has thus become both important and interesting. It has spread rapidly and widely, encompassing, in a few decades, the entire world in regional cooperation organizations of myriad forms.

At the deepest level, cooperation and peace are symbiotically bonded within the human genome, a bond which has effect on and continues into social life, economics, politics and sociology, culture and tradition, among a large number of factors that govern human behaviour. This starts with individuals and goes on to groups and generalizing further, to the different kinds of community that humans have formed throughout history. One important part of that history deals with the fact that groups of all kinds find it beneficial, profitable, and empowering to work together and to set themselves large aims. But all of this can as well be the foundations for cooperation as for rivalry. And there has been so much concentration on the other part of history, the one that deals with conflict and military rivalry, that the part that deals with cooperation and peace has been relatively neglected. Nowadays the picture is more balanced; there is growing attention to the forces that make for peace and cooperation, a growing literature that attempts to understand the circumstances in which a complex of states within any region will employ these forces to rule out war and even the possibility of war in their mutual relations.

Regionalism is juxtaposed with globalism, sometimes in opposition to it, sometimes working jointly, and there are a large number of theories that have been put forward to understand both these phenomena. However it is now more and more apparent that regionalism is the major driving force of today. That, too, makes it increasingly important, as well as interesting, to understand its different aspects.

This book explains regionalism with an emphasis on the various economic theories and models as well as other theories that have been propounded over the years since 1945. It has detailed case studies of three important regional cooperation ventures: SAARC; ASEAN and the European Union, in the hope that these will flesh out many of the theories.

I.P. Khosla is currently Member-Secretary of the Indian Council for South Asian Cooperation and Editor-in-Chief of South Asian Survey, the biannual journal of the Council.