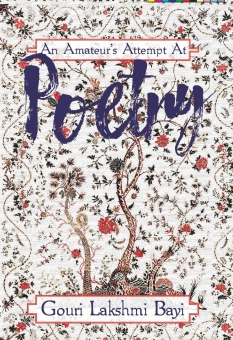 An Amateur’s Attempt at Poetry

In this book of hundred poems, which can only be described as straight-from-the-heart, Princess Aswathi Thirunal Gouri Lakshmi Bayi, a member of the royal family of the former princely State of Travancore, in a precious combination of nuance and eloquence, writes about her love and devotion towards Sree Padmanabha Swamy, the family deity of the royal family of Travancore and the presiding deity of Trivandrum, and towards her uncle, His Highness Sree Chithira Thirunal Rama Varma, the last ruler of the State.

Beyond these confines, Gouri Lakshmi Bayi’s poetic flight of fancy and her keen sense of observation are equally fluent in her poetic descriptions of nature and memory — in fact, all aspects of a life lived to the fullest, both physically and spiritually.

If the purpose of poetry is to search for the hidden meaning of life and the universe, then this book proves Gouri Lakshmi Bayi to be a fine poet of incredible charm.

Princess Aswathi Thrirunal Gouri Lakshmi Bayi, a member of the royal family of the former princely State of Travancore, is the niece of His Highness Sree Chithira Thirunal Rama Varma, the last ruler of the State.

A graduate in Economics, she has distinguished herself as a writer. She has to her credit over one hundred and fifty poems and several articles in English, most of which have been published in some of the prominent journals of India and abroad. Her first book Thirumulkazhcha has been a compilation of her poems, which were an expression of her deep emotion on the last days and subsequent demise of her beloved uncle.

The Dawn, her next work, is a collection of poems on a variety of themes, published by Macmillan India. Her third book Sree Padmanabha Swamy Temple is not only a treatise on the Temple, but also a testament of her deep faith in her family Deity.

Thulasi Garland, on 33 temples of Travancore, The Mighty Indian Experience, Glimpses of Kerala Culture, Rudraksha Mala, on 27 more Travancore temples, and two books in Malayalam carrying collection of articles, are her other major works.

She has translated from Malayalam to English, Sri P.R. Rama Varma Raja's book Sree Sabarimala Ayyappa Charitham and written the English text titled Portrait of a Painter Prince in the coffee table book on the famous artist Raja Ravi Varma brought out by Sri Mangaram of Bangalore. She has also presented many papers at various venues.

Married to R.R. Varma of Paliakkara Western Palace, Thiruvalla, she is blessed with two sons and three grandchildren.